In the news today was an article about a dog in Yuba City who dug up human bones in the backyard. There was a jaw bone and a skull. The police suspected religious rituals. My dog too has been digging. There is a spot up against the fence that is shady, where the grass never grew in thick, and he has been worrying at this for a week now. After he has loosened the dirt and cleared away the weeds, he will lie down for a minute or two, so maybe he is only trying to make a cool spot for himself, like flipping from one side of a pillow to another. But there is something frantic and mindless in the way he digs, and I don’t like it. He’s four years old, and he’s never done this before.

He woke up last night, growling and barking into the darkness. There was laughter out in the alley. Ryan got up and went through the house, flipping on lights and checking locks. He took a long time to return to bed, and the noises from the street sounded like they were coming from the kitchen. Really, it wasn’t the dog that woke me at all, but Ryan standing there beside the bed, looking and listening for something.

The owner of that dog in Yuba City was named Mr. Kind. In the quotes he gave to reporters, he said the word “kind” again and again. “It went from kind of cool to kind of serious,” he said, and I wondered what it must feel like, to say your own name so often. I had a boyfriend once named Rich. He was an asshole, and we wouldn’t be friends if I met him today, but sometimes I still see him on Facebook, and he lives in Yuba City, and he always has the same nice-teeth smirk, and he’s almost never wearing a shirt, and he always looks like he owns the place, wherever he is.

It occurs to me that the dog has been sticking close lately, subtly insinuating himself into my space. At night he jumps between Ryan and I, settles in slightly to one side. Ryan says, “Why does he only love you?”

Sometimes, when I take the dog for his walk in the evening, I will feel him shrinking away from some object or another that seems strange to him—bending into a c shape, crab-walking into my legs. Usually, I do not understand what it is that scares him, and I pull him along. Sometimes he will growl at the men who approach, and he does not show his teeth then, but his lips are pulled back tight. It is the same look he wears when he is digging: a look that says, “I don’t know what else I could do.”

Emily Kiernan is the author of a novel, Great Divide (Unsolicited Press, 2014). Her short fiction has appeared in PANK, The Collagist, Monkeybicycle, Redivider, JMWW, and other journals. She resides in Berkeley, California, with her man and her dog. More information can be found at emilykiernan.com. 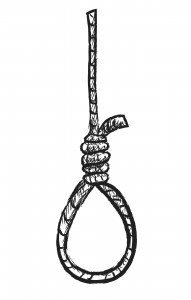