Ravi Mangla’s chapbook, Visiting Writers (Uncanny Valley Press, 2011), consists of 23 pieces of flash fiction.  These pieces each describe a chance encounter with a famous writer—removed from the trappings of academia or pop-culture consumption, these slices of life peer into the characters of Flannery O’Connor, Vladimir Nabokov, Charles Bukowski, Grace Paley, and other notables.  Mangla’s chapbook wants to provide fun little glimpses into humanizing moments—in the candid space, the writers behave in ways that give sly glances into the idiosyncratic quirks that may or may not have shaped their own writings.  It attempts to link art and artist.  Unfortunately, in many of the pieces, it comes off as too obvious.  I appreciate that each piece is resolute in its brevity, but ultimately these short visits into the lives of famous authors don’t use their few phrases to any advantage.  The journey comes off as somewhat contrived, as each reference to a new author reads more like a library manifest than a story.
That said, I also appreciate the way Mangla tries to keep things low-key despite the misplaced high-brow platitudes.  Bits of humor keep things light, such as the following two-sentence piece: “At the DMV I waited in line behind Gordon Lish.  He wanted a custom license plate but couldn’t settle on the right combination of letters.”  It’s a neat little nod to Lish’s reputation as a meticulous wordsmith.  The collection is full of these inside jokes for well-read audiences, but the end result of these little gems doesn’t have staying power—it just reads like a laundry list of winks from Mangla that become almost expected and anticipated by the end of the chapbook.
This first chapbook from Ravi Mangla has an ambitious premise, but it doesn’t meet expectations.  However, Visiting Writers represents a step toward a more cohesive authorial voice for Mangla.  There is evidence of Mangla’s attention to detail throughout the chapbook, and even if the chapbook fell flat for me, I imagine that some of Mangla’s stylistic choices will evolve and serve him better in his next collection.  All writers grow and learn as they revise their work, listen to critics (or ignore them as necessary), and reflect on past projects.  I sometimes wretch when looking back at my work from five years or even five minutes ago; Ravi Mangla’s piece is fine-tuned enough that it doesn’t force this gag reflect, but it still misses the mark.  So this brutal review aside, Mangla may be an author to watch.  Visiting Writers was contrived, and it almost used its premise as a crutch—hiding behind its literary references while failing to impress on its own merits—but when Mangla steps into his next project, the undercurrents of craft in Visiting Writers could come to the surface in an amazing way.
Review by James R. Gapinski
© 2012, All Rights Reserved

Aesthetically, Radioactive Moat Press’ electronic treatment of Yellow Fringe Dress is fitting.  The chapbook is well-designed with interesting typography and a gorgeous cover.  It fits the fractured fantasy-esque dreamscape vibe of Mezynski’s poetry, and it showcases the potential of electronic publishing.  While I love print media, electronic publication has its own unique place too, and it can be an art form unto itself (when done properly—and Radioactive Moat Press consistently does it properly).  Though Mezynski’s syntax is experimental, the chapbook’s inviting aesthetic makes it easy to read.  The layout compliments the flow rather than hindering it; I wish more e-books featured this attention to presentational quality.

But enough about the design notes for this digital chap; what about Mezynski’s work?  The text is arranged in a hybrid prose poem state.  There is attention to structure, but many of the passages opt for less overt poetic structure in favor of a hybrid prose poem appearance—her work is one of the few examples of a true prose poem: lyricism embedded into prose.  There seems to be an overabundance of books/chapbooks that call anything short prose piece a “poem”–Yellow Fringe Dress is not one of these.  The collection is well-crafted, and it’s subtle arrangement ads minute layers of meaning to poetry that derives most of its purpose from syntactical variance and interesting word choice.

The chapbook’s plot is a postmodern type of anti-bildungsroman, with several instances of twisting plotlines that test the reader’s perception of what a coming of age story really can be and do.  The chapbook only stumbles moderately in its slow beginning.  If you can push through the first few pages, the latter half of Mezynski’s chapbook will surprise you.  Early on, there feels like a lack of movement, where the same themes are repeated.  Mezynski does this for thematic emphasis, yet it bogs down the reader slightly.  Once Yellow Fringe Dress picks up the pace, it hurtles at breakneck speed with vivid imagery and carefully planted sensory details. 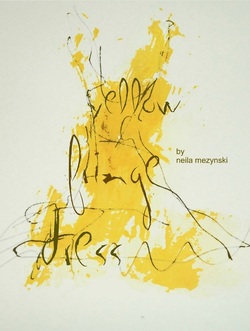 The experimental style may be hard for some readers to swallow, but the general storyline of Yellow Fringe Dress is beautifully summed up in the ending section.  The breadth of Mezynski’s piece is distilled in a minimalistic recap that can be transposed over all the preceding sections.  If you get bored or annoyed with the chapbook’s other experiments, just flip to part VIII as a cheat sheet.  You’ll miss all the detailed bridges between these fragmented, wispy little descriptors, but it’ll help you understand the central theme easier.  It’s a nice device that provides framing and closure to Mezynski’s well-told story.

At times, the text is wordy and could use some paring down to the bare poetic essentials.  But overall the piece is well-written, and Mezynski’s Yellow Fringe Dress provides a manageable foray into experimentalist syntax and imagery for audiences who might be new to this type of writing.  It is an accessible piece that gets you ready for more work by Neila Mezynski or similar writers—and after you read Yellow Fringe Dress, you’ll definitely want more.

You can find Yellow Fringe Dress at the following URL for free:
http://issuu.com/radioactivemoat/docs/yellow_fringe_dress