“This Childhood, sponsored by Chanel,” by Eliza Tudor 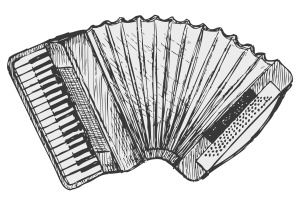 1. “What do we do before we eat?” Rhetorical. Don’t ever forget, my children.

“We take a picture,” the five of us muttered. Pim just pounded her tiny fist on the table while watching Mama. Mama was up the ladder, her eye obscured, exchanged for a larger one, a creature looking down at us.

“Now,” she called. Our hands reaching out for bread and butter. “Pause.” We stopped, hands hovering in place. “Go.” Berries. Our goat’s cheese. “Can you spread with your elbow down, Hal? Yes. Like that. Good. Freeze.” The sound of the click. Click click click. “Stop. Stop! Pause. Okay. That’s good. That’s enough. Enjoy everyone. Bon appetite.” Tired, she came down the steps of the ladder, both eyes her own.

“I want us to make a manifesto for our family.”

“What do we think are important? I hate (‘Mama said the h-word!’)—Sorry!—I detest the word—laws—but if we had them—guidelines, rules,” she said, her upper lip a snarl. “What would they be? Our values. Our ethos.”

She took a drink. “We need a manifesto.”

I leaned against her and read aloud as she wrote: Stop Consuming. Eat good food. Play the banjo. Take a risk every day.

“We fight the isolation of parenthood, the isolation of ‘jobs’ and ‘suburban culture’ every day. We are warriors, my love. We are a new vision of what a ‘homemaker’ can be. A maker of the home, genderless. Radical stuff, my angel. And let’s say, several years from now, you want to build something for yourself. You, my love, will have a head start. A readership in place. So will Bette and Lev and Pim and Freya and Hal.”

3. An unsponsored life is not worth living. (or, The Emperor’s new clothes)

“If we didn’t accept sponsors, love, we might have to work for big corporate firms and then we’d be away from you all day,” Mama said. “This is better. This is a new world order.”

First, it was Timex, not Chanel. It was mid-level corporations. The fun we had at mail time. All the boxes, all the packing supplies; we used to make entire villages. Sure we had to wear the stuff in pictures, taste the snacks they sent, packaging forever font-forward.

But then Karl started reading Mama and he was doing a kind of Swedish-19th century-Japanese farmer-before-the-war look and that was her exactly. He flew us in. My mother in her headscarf and handmade sweater, her overalls setting off the security sensors; her clogs kicked off as we stood in front of her, waiting. I will never forget that flight.

“I love everything about all of you,” Karl said, when we arrived. “The family VonTrapp.”

“But modern,” the crowd beside him spoke.

Papa played the banjo. Bette played mandolin, Lev on fiddle, Hal on accordion. I was on uke. And then, Freya began to sing and Mama joined on harmony (Pim peeking out from her sling, waving) and I can’t remember what happened next until the clapping started. Everyone stood; the mounds of hay that had been shipped into Paris, between us.

Eliza Tudor is a recent transplant from Silicon Valley to the south coast of England. Her work has appeared or is forthcoming in Hobart, PANK, Annalemma, specs, Weave, Punchnel’s, Paper Darts, The Flyover Country Review, graze, and the anthology, Mythic Indy. You can find her through www.elizatudor.com.