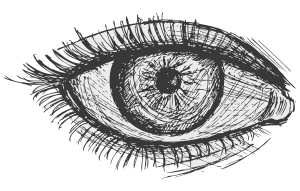 I know a woman with orange hands. Orange hands and the thickest glasses. Everyone says carrots are good for the eyes, no one wants to catch scurvy, so for the last eight months, she has been living on carrot sticks and orange juice. Sometimes, for variety, the carrots go in the juicer. Sometimes, for fiber, she cuts the oranges into sections instead of squeezing them, six half-moons in a circle.

The woman I know has one of those eye charts in her bedroom. Once a month, she stands with her back straight against the opposite wall: E, F, P, T, O, Z. The rest of the time, she scrupulously avoids looking in that corner. I think: she could just cover it. But she is testing her mind as well as her body. Someday, her patience will be rewarded. Someday she’ll find out what comes after Z.

I do some reading of my own. Carotenosis: Pigment in the blood from excessive consumption of carrots and similar fruits and vegetables. Pumpkins. Papayas. Collard greens.

I know a woman with an orange nose. At first I didn’t notice, but now it’s hard not to stare. It is spreading, and I wonder what will be next. Her cheeks. Her lips. The roots of her hair. I wonder if she knows. Her vision is fine with those glasses on; she is short-sighted, not color blind. But there are different kinds of not seeing.

Maybe “spectacles” is a better word – the lenses are high-density plastic. With her myopia, actual glass would be too heavy, those frames wouldn’t stay on her nose. Her orange nose. It is a terrible thing when she catches me staring. Refracted in those transparent blocks, her gray eyes blink, seeking mine out from a great distance.

I know a woman with orange feet. I cradle them in my hands, two halves of some strange fruit, and she laughs and thinks that I am the strange one. Her glasses go on the dresser when we make love, and her eyes seem unfocused, or not focused on me, which is not the same thing. Without them, her face is another face, unknown and involved in unfamiliar contortions as it moves in the shade of my body. This distracts me; sometimes I finish without finishing.

Her silhouette dwindles, the eye tests prove nothing – carrots and oranges are water and paint. Is this all out of vanity? Maybe contact lenses hurt her eyes – it would explain those afternoons locked in the bathroom, the red-rimmed eyes (the whites still white). Surely there are alternatives, things to do with knives and lasers. But there are different kinds of pain, and they are not equal.

Some days, I think of taking down her chart and replacing it with letters of my own. Notes of endearment, sweet nothings, a reminder that we’re out of toothpaste. This is just to say, I’ve eaten the oranges that were in the ice box.

Other days I wonder how far things have gone. Surely it begins on the inside. It is on the surface now, what would I find if I started to peel her, how would I begin? Move in a circle, counter-clockwise, paring vertical strips down the sides? Or would I dig in with fingers, white new-moon scars in the flesh, me under her skin, her under my nails?

I am familiar with the center of an orange, the bitter pith, the pips slippery like teardrops. Carrots, too, have secrets, sliced on the bias: an inner circle, a paler star.

I know a woman with orange blood. Carotenaemia – there is a word for everything.

Talk to a doctor.

The stain itself is harmless, pigment, not poison.

That there is nothing wrong with you.

I’ll do it tonight, when there is a full moon; a cycle is ending, a cycle begins. I see her, weeks from now, back straight against the wall. She presses her orange palms flat against the white surface, her feet too, soles flat on the floor, doing all she can to avoid rushing forward, glasses pressed to her nose, to finally read the writing on the wall, to find out what comes after G, O, O, D, B, Y.

Hsien Chong Tan is a recent MFA graduate from the New Writers Project at UT Austin. He lives in Wisconsin with his wife and two cats.