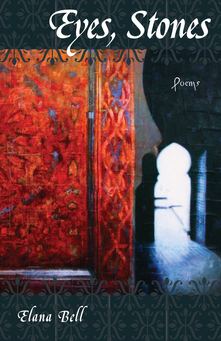 Elana Bell’s debut book of poems, Eyes, Stones, walks a hairline-tightrope between one side and another in the Israeli-Palestinian Conflict. Bell mines the depths of twentieth-century history, presenting persona poems in the voices of Jewish Holocaust survivors, Zionists, Palestinian refugees, and folk heroes from either side of the violent ongoing conflict. Reading Eyes, Stones is like rediscovering the poets Carolyn Forché and Ai; there’s a sense of joy and terror bleeding through the page. However, Eyes, Stones is wholly Bell’s achievement—a deeply personal collection of poems of witness, illuminated by compassion.

Bell, who descended from Holocaust survivors and has taught in both Israel and Palestine, has a deeply personal stake in this book; she depicts her ancestors’ struggles to reclaim their homeland in early to mid-twentieth century, while also depicting the struggles of “the enemy,” exiled in their own land, afflicted with poverty and extremism. Bell’s compassion leads into a painful conflict for the poet and these poems—rather than maintaining objectivity, Bell opts for subjective first-person speakers, placed side-by-side, at times difficult to differentiate. Perhaps the best example of this is her poem, “Naming Our Dead,” which is composed entirely of extinguished and displaced Palestinian and Israeli towns, villages, and settlements. The poem, which is difficult to reproduce here, is rendered as a long block of prose with names in alphabetical order, punctuated by periods and indents. In three different places, a gaping hole yawns across several lines as if missing chunks of prose; the holes resemble the crisp silhouettes of petals.

Another poem presenting the immediate conflict (of conscience and compassion) is “Language in the Mouth of the Enemy”: “I am afraid that this poem / will contribute to the destruction of Israel” (1-2). Motive is not what’s in question here, but consequence. Bell’s speaker, a teacher, fears that if she educates Palestinian women, she will arm them with yet another weapon:

if I teach the women of Nahalin poetry,
if I give voice to their rage,
what great-aunt of mine shot in the back
before an unmarked grave will have died then,
again for nothing? (7-11)

And if she expresses sympathy toward the plight of Palestinian refugees, she will automatically betray the Israeli state; she will betray decades of sacrifice and struggle:

The question, “What have I done?” is repeated over the last three lines; here, Bell carefully breaks the lines to impose short pauses, adding to the sense of gravity. Their syllabic lengths whittle down suggesting that the bulk of the poem balances uncertainly on two syllables, as if one single well-intended act will cause the whole destruction of Israel. The anaphoric, iambic “If I” directs us toward the speaker’s personality, motives, and empathy; the last line, “I done,” places the stress on her action, ignoring original intentions and focusing on the consequence.

Another standout (trio) of poems, each spoken in the voice of Yasser Arafat, are “How I Got My Name (Arafat),” “The Chairman,” and “Military Tactics.” Each poem occurs in each of the three sections composing Eyes, Stones, and each may serve as the closest reminder—along with the poems “How I Got My Name (Jabotinsky),” “Wolf,” and “Kishinev,” which are spoken in the voice of Zionist leader Jabotinsky—of the poet Ai. Bell’s abilities as a persona-poet (a bad label since arguably all poets are persona-poets) are impressive, given that much of the language she employs is consistently richly violent, stark, and rhythmic from poem to poem, with slight differentiation between speakers beyond context and tone:

We are inside the dream of a God who’s forgotten us. There is no other way to say it. Through the stippled glass I watch the neighbors hammer nails into the Jewish babies’ eyes. Mama pulls me to her breasts that smell of bread and smoke. I want to look. There are no windows from which I do not see the city burning. (“Kishinev”)

The sentence, “There is no other way to say it,” recalls a sentence from Forché’s “The Colonel”: “There is no other way to say this.” Perhaps Bell unconsciously intones the voice of Forché, whose definition of “poetry of witness” has pretty much shaped all consequential discourse on the genre. However, comparisons are easily drawn in any book; this is not to detract from Bell’s originality or discourage reading the volume through an autobiographical lens. Rather, calling forth these two poets help us locate Bell’s prescient, carefully and urgently crafted verse as among some of the most jarring and provocative poems of witness available. Unfortunately, aside from having the distinction of the Walt Whitman Award, Bell’s Eyes, Stones won’t place high on poetry bestsellers lists (yes, they exist!). But rest assured, the book will circulate among patrons of The Academy of American Poets, backdoor reading circles, and a few classrooms in years to come.
Review by Tristan Beach
© 2012, All Rights Reserved