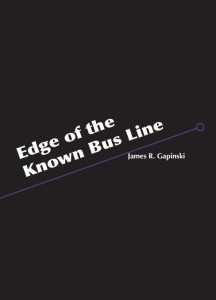 James R. Gapinski, managing editor of The Conium Review, was named a 2019 Montaigne Medal finalist for his novella, Edge of the Known Bus Line (Etchings Press; University of Indianapolis, 2018).

This prize is an offshoot of the Eric Hoffer Award, which focuses on works published by small, micro, and academic presses. The Montaigne Medal, given in honor of the French philosophy Mchel de Montaigne, is specifically reserved for thought-provoking works that “either illuminate, progress, or redirect thought.”

The full list of finalists can be found on the Eric Hoffer Award website. Congrats on being named a finalist, James!