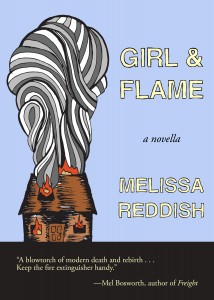 Melissa Reddish’s novella, Girl & Flame, came out earlier this week. Through August 31st, we’ll be running a Goodreads Giveaway for her new book! As a special bonus, winners of the Goodreads Giveaway will also receive a complimentary copy of Brian Philip Whalen’s limited-run micro-chapbook, And It Will Be Called the Highway of Holiness.

Click here to enter for a chance to win one of five free copies available. Girl & Flame is an formally innovative novella that chronicle’s a woman’s search for self and understanding after her father, brother, and lover are consumed in a devastating fire. Sarah Rose Etter, author of Tongue Party, says “Reddish’s prose dazzles and burns. It’s a fire that’s impossible to ignore.” A reviewer for Sabotage Reviews calls the book “A daunting but dazzling blend of harsh reality and an eerie fantasy.”

Melissa Reddish, author of the Conium Press title Girl & Flame, has new work in Ilanot Review. Read her piece, entitled “All the Things We Have in Common,” here.

The reviewer, Daisy English, says the novella has a “sharp, decisive yet incredibly intimate language, adding a personal tone.” She goes on to say “In Girl & Flame Reddish successfully brings an inferno to life. A daunting but dazzling blend of harsh reality and an eerie fantasy.” Read the full review here.