Last Spring’s excellent edition of The Kenyon Review is prefaced by Editor David H.  Lynn’s notes on their online readership survey.  Fact: over two-thirds of respondents read the print version, while obviously also tuned into their website offerings.  This bit of data says something about print journals in the digital age, specifically this venerable international volume.  Everything about this publication carries a tangible steadiness of quality, like 400-thread-count sheets in a fine hotel.  You can pull back the covers and slide in, knowing you’re going to have a lush five-star experience.  The feel of the paper stock, the size of the journal, its layout and design is assured, elegant, as are the authors whose fiction, poetry, non-fiction and reviews are featured within.  For a cover price of ten dollars, readers of this issue are swathed in the luxurious work of seventeen highly accomplished writers from around the world.
What adds to the satisfaction of the issue is the editors’ masterful blend of unified quality with impressive diversity of subject and style.  Marilyn Hacker, a poet (and former KR editor) who needs no introduction, collaborates with Palestinian-American poet Deema Shehabi (three-time Pushcart Prize nominee) in “From ‘Diasporenga’”, an ‘alternating renga.’” 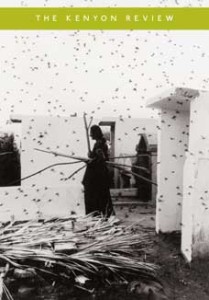 Alternating serif and sans serif fonts with white space shape the women’s duet in renga form, sections of three /two /three /two-line stanzas that play off the each other like two soloists trading riffs.  A last couplet of ‘as she stumbles in her long / nightgown: “Sabâh el-fûll yâ âmar.”’ prompts ‘“Morning of roses,” / she wishes the greengrocer.  / “Morning of light,” he // answers.  Early cherries ripen, / and the small sweet strawberries.’ The whole poem is fragrant with the language of women poets, including Emily Dickinson, while it is a modern, unflinching diaspora of women’s family casualties from ongoing cultural clashes in places such as Gaza and Darfur, of names ‘of villages razed / in 1948 stitched with golden thread’ on a Palestinian tent in an exhibit in Houston.

Turn the page and you’re in Robert Yune’s fictional “Solitude City,” being woken up in an Alaskan condo to take a conference call from Korea to deal with a family emergency.  From there the story unravels transcontinentally with an enigmatic confidence comparable to the proverb on ‘the stupid scroll on the wall.  Speak of the tiger and it will come.  And here it is, a silent, fiery messenger of change.  The signal fades, and it’s back to text.’ An intricate alternating current as developed, international and graceful as the renga, Yune’s short story is enlightening: deft storytelling with a savvy of world markets, corporate gamesmanship and Korean culture.  Characters are smart and sharp and tender and funny – polysyndeton intentional – as is the dialogue, internal, external, digital, human.  Speaking of dialogue, there’s an online conversation of Yune at KR’s website here.

Earlier, there’s “Hellen Keller Answers the Iron,” Andrew Hudgins’s kickass non-fiction piece, the only one of the genre.  Read it.  That is all.  Andrew M.  Wells contributes two stark poems of grief.  Jeffrey Meyers reviews Saul Bellow letters; Cynthia Haven covers Milosz and Brodsky.  Katharine Larson begins the poem, “Lake of Little Birds” with “Let me begin with the lepers at Lake Bunyonyi.” And that’s literally not the half of it; I’ve mentioned only six of seventeen contributors.  Albert Goldbarth.  Kevin Young.  Still not the half.

As it says above the masthead, The Kenyon Review is “an international journal of literature, culture and the arts.” And yeah, everybody knows that, but do you know what a delight it is to spend time with, to hold, to look at, to read?  From the cover photograph of a woman in an outdoor cemetery carrying wood for a pyre, the sky around her filled with dragonflies, the Spring 2011 issue remains rock solid as it floats through the bittersweet metaphysics of reality in a digital, still-conflicted international community, with our losses and loved ones, our wounded beauty, our stupid jokes.  It’s always reassuring to see what language, in the right hands, can do.  As if a poem could save the world.