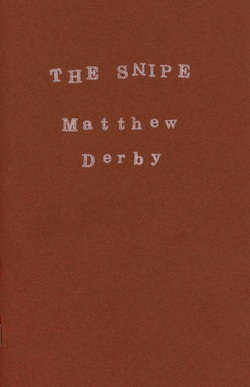 Matthew Derby’s The Snipe is a relatively short publication (28 pages—although that’s not-too-short considering it’s a chapbook), so here’s a relatively short review.  The chapbook tackles issues of infidelity, jealously, and the sprinkles of self-delusion that often accompany these themes.  The chapbook is a funny piece of work—light at first, gradually becoming dark humor later on.  And even as the principal character begins to enact revenge fantasies against a woman in her friend-circle, Derby keeps you laughing with musings on gender constructs—recalling a shopkeeper’s crack about her buying “the pink rifle as well as the pink magazine loaded with punk bullets that looked like glossy lipstick,” it’s noted that “at that moment she wanted nothing more than to fall into step with the legions of ladies who had come to the armory in search of pink rifles.  She imagined herself at a shooting range with the ladies, all of them standing in a perfect row, taking aim at the paper targets in unison” (22).I won’t spoil the climax of The Snipe, nor will I uncover the tangled mess of emotions that run through Derby’s characters, suffice to say that the “mess” comes into focus by the end.  It’s a chapbook with a sense of purpose that sharpens as its narrative arc progresses—providing social commentary alongside the lighter notes.  If the chapbook has a failing, I’d suggest that the reliance upon gender stereotypes to make its points doesn’t seem to work in a couple of situations—even as Derby obliterates others instances of stereotyping throughout the chapbook.  The juxtaposition of generalization and authenticity stops short of heightening the chapbook’s subtle ironies.  Regardless, potential sticking points are nominal, and Matthew Derby’s The Snipe is a fun romp that deserves a read.  The signed and numbered copies of this chapbook are sold out, but you can still order a copy of the second printing through JR Vansant’s website.
Review by James R. Gapinski
© 2012, All Rights Reserved