“From the Files of Abdul Q. Rosenblatt, Genie to the Stars,” by Molly Lazer 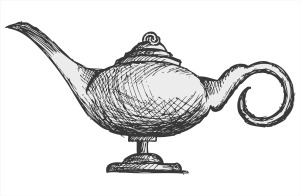 Sometimes I don’t understand people. He could have just asked to be king. Instead, he wished for super-strength to pull some sword out of some stone. So I hulked him out, and he got the metal out of the rock. Everyone oohed and aahed, and it was all very impressive. Still, it seemed like backwards logic to me. His next wish? A nice, circular table.

He said he wanted to be the supreme commander of the world. I told him that was a bit beyond even my abilities, so he said, and I quote, “Can’t I at least conquer Khwarezmidia?” I told him he might need antibiotics for that. Mongols have no sense of humor. So I granted his wish, and he ran around slaughtering Khwarezmidians, yelling “K_____!” like it was a battle cry instead of his name. I figured, at least he’s happy. He was nice enough to keep the blood spray off my lamp.

He wanted to get rid of his nagging wife, but I don’t deal in uxoricide. Genies don’t kill people, I said, people kill people. I suggested he move to the big city and leave her upon the Avon, which he did. One wish down, and I barely had to leave the lamp. Without A_____ on his back all the time, he became one of those high-maintenance actor types. Truth to tell, he wasn’t very good. There was a lot of over-emoting and shouting loud enough that they could hear him in the bear-baiting arena across the river. He wished that the rabble would stop throwing tomatoes at him. I figured it wasn’t my job to tell him he might need acting classes, so I suggested he start writing plays instead of acting in them. He thought that was a brilliant idea – now he could write himself roles he actually liked. Oh, well, I tried. I apologize in advance to the English stage. After a few weeks of writer’s block, he wished for inspiration. I told him to go read some history books. Maybe he’d like the one about the hunchback.

I sat on her shelf for years before she let me out. Understandable. How was she supposed to know the lamp was enchanted when it was just one of many in her collection? I don’t even have any jewels inlayed in my brass. Plain and simple, that’s how I roll. So she accidentally rubbed my lamp, and to say she was surprised would be an understatement. She wished for a baby. I asked her a few questions and discovered that I had to sit her and her husband, L_____ down and explain about the birds and the bees. It was every bit as awkward as you’d imagine. I suppose they spent the last seven years just sitting around playing tiddlywinks.

She didn’t make a second wish for years, being busy with children and being queen and the revolution and all. Someone said the peasants were starving. “Let them eat brioche,” she said. Cake rained from the sky, but I don’t suppose that ended up in the history books. I never get any credit. M_____ got her head chopped off, and the I.O.U. for a third wish I wrote to the French monarchy went missing during an auction at Versailles.

His third wish was for a quiet evening at the theater with his wife.  Whoops.

His first wish was to be a successful athlete. Wish granted. Then he wanted to be an actor. Wish granted. His third wish was a bit baffling. He came to me in a panic with a glove and asked me to shrink it down a size. I told him I could just get him a new pair if his gloves were too big, but he insisted. Wish granted.

Molly Lazer is a MFA candidate in Creative Writing at Rosemont College. A former editor at Marvel Comics, she now teaches high school, acts, and directs plays outside of Philadelphia. Her work has appeared in The Pennsylvania Gazette, Gingerbread House, and FlashFiction.net.