Melissa Reddish recently wrote a piece for Monkeybicycle‘s “If My Book” series–where authors compare their new books to strange things.

Melissa says “If Girl and Flame were a love letter, it would be addressed to Buffy the Vampire Slayer, Gilmore Girls, Joan Jett, Garbage, Fiona Apple, Joan Didion, Margaret Atwood, and my mom.” We couldn’t agree more. Dig deeper into Melissa’s comparative interpretation of her novella here.

Matt Tompkins writes “If My Book” piece for Monkeybicycle 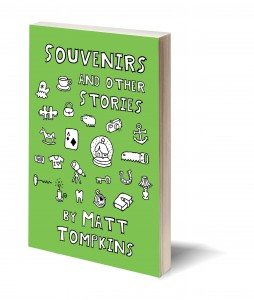 Matt Tompkins talks about his new Conium Press title, Souvenirs and Other Stories, for Monkeybicycle‘s “If My Book” column.

For this Monkeybicycle feature, authors compare their recently released books to weird things. It’s a fun column and a unique way to get a taste of a new book directly from the author.