“A Partial List of Things Lost in the Fire,” by Melissa Reddish 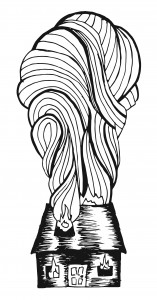 Taking out the trash; taking out the recycling; rolling the trash to the curb on Sunday night; the leaking dishwasher; the water spots on the glasses; the mismatched pull chains on the bedroom fan; all the burned-out light bulbs; all the used paper towels; all the socks with holes in them; the four broken glasses and the tiny shards of leftover glass beneath the fridge; the empty ice-cube tray that no one remembered to fill; the hum-dinga-ding of the dryer when it was finished; the broken front step; the broken back step; the fallen branches from last night’s storm; the leaves in the gutter; the leaves on the lawn; the leaf inexplicably in my bed; The Land Before Time on video cassette; my mother’s gold wedding ring; the dusty blinds; the family photos leading up the staircase; my father’s favorite coffee mug; the broom in the hall closet; the bottles of Clorox, Bam!, and Windex, mostly full; the twenty-eight pairs of shoes; the thirty-one pairs of pants; the eighteen neckties; the single pair of cufflinks, never worn; the upstairs hamper (for shirts, pants, and other outerwear); the downstairs hamper (for underwear, socks, and towels); the set of Nutcracker decorations passed down from my grandmother; the set of nice cloth placemats for company; the dress I wore to Junior prom; my mother’s jewelry box; my brother’s stack of Maxims; the chipped clay pot from middle school used to collect coins; the box of extra cords nobody properly understood but kept out of a misguided sense of propriety; the alarm clock; the blue and yellow and pink sheets from each bed; what was on the sheets from each bed; the answering machine asking you to leave a message after the—

Melissa Reddish is the author of the forthcoming Conium Press title, Girl & Flame: A Novella. Melissa’s short story collection, My Father is an Angry Storm Cloud, was published by Tailwinds Press in 2015. Her flash fiction chapbook, The Distance Between Us, was published by Red Bird Chapbooks in 2013. Her work has appeared in decomP, Prick of the Spindle, and Northwind, among others. She teaches English and directs the Honors Program at Wor-Wic Community College.

This story is an excerpt from Melissa Reddish’s forthcoming novella-in-flashes, Girl & Flame, scheduled for release on August 15th, 2016 and currently available for pre-order. 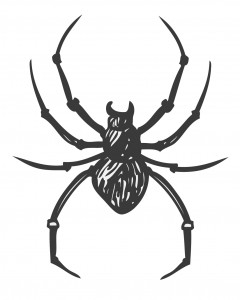