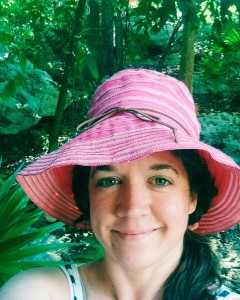 Yes, Emily Koon. The same Emily Koon who won our Innovative Short Fiction Contest in 2015, judged by Amelia Gray. As always, the judging process was 100% blind, and Matt Bell was instructed to recuse himself if he could identify the author. We’re surprised that her work anonymously bubbled to the top twice — but then again, not too surprised — she’s just a damn good writer.

The stories in We Are Still Here are an eclectic mix including fairy tales, ghosts, Lizzie Borden, and people living in a Sears. In the title story, a family visiting an amusement park flees after a fatal roller coaster accident, only to find the real horror is on the chairlifts. In “The People Who Live in the Sears,” a group of people who find the real world too painful to function in make new lives in their local Sears department store. In “The Ghosts of St. Louis,” two teenagers living in a futuristic North America attempt to make sense of a world marred by climate change. Characters in these stories wrestle with questions of death, loneliness, abandonment, and their capacity to love, be loved, and inflict pain on others.

Emily Koon is a fiction writer from North Carolina. She has work in Potomac Review, The Rumpus, The Conium Review, Portland Review, and other places. She can be found at twitter.com/thebookdress.

Emily’s manuscript will be published by Conium Press, and she will receive $1,000, ten author copies, and a copy of the judge’s latest book.

We’re grateful to all the authors who submitted, and we hope you’ll join us in congratulating Emily, singing her praise on social media, and buying/reading her kickass book when it hits shelves. We expect to release Emily’s collection in late 2017 or early 2018.

Pre-orders are now available for Souvenirs and Other Stories, by Matt Tompkins! This title is scheduled for release on June 15th, 2016.

Souvenirs and Other Stories contains six absurd and surreal stories—a father evaporates, items mysteriously appear and fill an apartment, an eye surgery causes optical hallucinations, and more. Beth Gilstrap, author of I Am Barbarella, calls this collection “a strange, heartbreaking, and often darkly comical book,” and Sheldon Lee Compton, author of Brown Bottle, says “No one else today is plumbing the depths of the human spirit and its limits in quite the same way as Tompkins.”

Matt Tompkins is the author of Studies in Hybrid Morphology (available now from tNY Press), and his stories have appeared in Little Patuxent Review, New Haven Review, Post Road, and other journals. For a limited time, pre-orders are just $10.00 for the collection that Jen Grow, author of My Life as a Mermaid, calls a “thoroughly entertaining, a smart and funny collection from a wildly imaginative writer.”

Manuel Gonzales’s short story collection, The Miniature Wife and Other Stories, was recently awarded the Sue Kaufman Prize for First Fiction from the American Academy of Arts and Letters.  Congratulations, Manuel!

Curtis Ackie’s short story collection, Goldfish Tears, transports readers into surrealist landscapes painted with mostly stunning detail.  While there are some nominal flubs that take the reader back to reality, most of the collection keeps the reader believing in Ackie’s world—a world where the sun forgets to rise one day, a husband builds a machine to “correct” his wife’s appearance, and a woman wakes to find that her stoop has dissolved into absolute nothingness.  The premises of Ackie’s stories are wrought with potential.  The climaxes aren’t always grand—which is a good choice that keeps the stories grounded, despite their bizarre beginnings.  The endings are not always as succinctly approached as I’d prefer, but they are satisfying nonetheless.  The book also contains a series of illustrations from Lorena Matić, complimenting the book’s tone with snapshots of individual scenes.

Most of the stories are written in present tense, hurtling the reader directly into the inciting incident.  From a linguistic standpoint, you can tell that Ackie is fresh off a poetry collection as he writes these stories, inserting a number of poetic devices into his prose—alliteration pops up everywhere and some pieces have a distinct lyrical quality.  His environments are clear and he finds precise ways to describe otherworldly occurrences.  For example, in handling the surrealist elements in “The Colour of Nothingness,” Ackie writes these vivid lines:

“She runs her hand along the doorframe and then sticks the left one out.  Gobbled up by the colourless nothing, the digital pentad ghosts out of sight, but the sensation in her wrist suggests the invisible appendage still exists.  Unnerved, she pulls her hand back in and waggles her fingers about in front of her face to make sure all is in order; four and a thumb, normality.”

This simple scene helps depict that which is literally undepictable—Ackie describes the look of “nothing” through a character’s curiosity about the blank void on her porch.  Her sensation is captured by the description of a phantom limb, but it isn’t overdone.  And rather than bluntly describing her worry with some overused platitudes, Ackie shows the character’s somewhat vexed thoughts through her actions.  The character counts her fingers to make sure they are all there, and this simple action clues the reader into her state of mind.  Ackie does this all with active text and a keen awareness of how his character is behaving.  He lets his characters make choices within their worlds rather than simply having the worlds exist around them.

However, there are a few moments when this breaks down.  In some instances of character action, Ackie loses his bead on the character’s motives and they come off as detached character sketches.  The characters are occasionally said to “see” the environment or “hear” a sound in a generic, explanatory way.  This takes the reader back to a place of observance rather than engagement with the world.  These simple phrases tend to damage the beautiful language highlighted in “The Colour of Nothingness.”  In some settings, these descriptors are useful in conveying a character, but in Ackie’s surrealist realm, I think it pulls the reader too far out.  In these instances, the reader is aware that this is just a story on a page—it shatters Ackie’s otherwise adept world-building.  But that is a picky thing to gripe about, since a lot of the stories retain the active presence that Ackie’s tales demand.  The immediacy of his present tense POV and the penchant for lyricism across the book keeps Ackie’s stories connected to the reader.  Goldfish Tears is a solid collection of short stories from this poet and novelist.