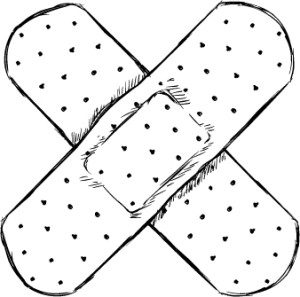 Some time during the night a tendril of hair shot free from Zoyzi’s tightly plaited hair to snatch the collar off the cat. Her therapist thought perhaps a pet might calm her agitated mane, but if anything, the small black kitten served as an amusement, a play thing for her predatory protein to tease and taunt until the game proved tiresome and ended with a snap of the feline’s neck. As she untangled the hair from the collar with the tiny silver bell, the strand resisted, winding itself tight in and around the pink leather in refusal to comply. She grabbed the scissors off the nightstand and cut it quick and clean at the scalp, sealing the long lock in a sandwich bag to suffocate it. She watched it slither from the collar and struggle against the ziplock. “You had your chance,” she said and tossed it in the trash, slamming the lid closed against the frantic bell-ringing. She decided to give the cat to her therapist.

Unruly, her mother had said of her hair, a real bird’s nest particularly so the day she came home with a dead sparrow entwined about the neck. Her father called her the devil and shaved her head while her mother whisper campaigned to anyone who would listen a story of head lice being passed around at school. She wore a beanie until the new growth started making itself known by poking up through the knit, waving about, grabbing anything within reach, mostly insects. Flies were the easiest to ensnare, which never made sense, any bug with compound eyes would seem forewarned of the slightest of movements. Her parents reshaved her head and changed up the story-their beautiful daughter had cancer. Chemo had claimed her hair, leaving her scalp as smooth as a baby’s bum. Zoyzi took to wearing the fashion most associated with the disease, bandanas and scarves, double folded to squash the motion of the baby hairs squiggling beneath the fabric. Once her hair reached the tiniest bit of length, the restrictive styles became her trademark of sorts—hair knots and cornrows, gorgeous side braids and exquisitely woven plaits—any style tightly bound to contain the energy. Yet, when released for the weekly wash and comb-out, the unrestrained hair whipped out it’s fury, leashing her to the towel rack or strangling her about the throat, releasing her at the brink of unconsciousness, well aware within the fiber of their being, the relationship was indeed symbiotic. Without her there was simply no them. To avoid the conflict, Zoyzi took to wearing dreads washed as is, easily woven in every sort of style imaginable. She was the cool girl with the every changing hair who survived cancer and through her high school years, her hair remained demurely compliant.

Against the wishes of her parents and probably because of so, she attended college out of state in a city heavy with alternative students. She looked like them and they like her and she walked among them undetected. For the first time since Zoyzi could remember, she felt, at least figuratively, she could let her hair down. She worked as a server at a coffee shop off the city park and after her shift, walked home past the fountain to toss in a penny for continued luck from the hair gods. The locals warned her the park wasn’t safe after sundown, but she continued unafraid, armed with her quiver of hair.

As she approached the spouting luminous swans, a single blonde wisp escaped her serpentine braidhawk to brush the nape of her neck. She reached to tuck it back, but it darted about, pointed and furious and liberated, stabbing her fingertip when she came too close. Her scalp tingled with the awakening of the others and she pulled her hoodie over her head to curtail the explosion should her hair work itself loose. Veering off the manicured sidewalk leading to the magnificent fountain, she stuck to the shadows leading the way home where once inside, she would grab her scissors and trash bags and shave her head close as did so many of the girls in this city. Why she had not thought of it before, she couldn’t say, but all Zoyzi knew was the time had come to cut herself free from her unraveling.

Her hoodie was alive with slivering tresses when she sighted the group by the gate leading out of the park. Zoyzi slipped back against the fence and watched two boys and a girl the age of high school students arguing with two men. The girl turned to run, but the flash caught her and dropped her to the ground. One boy ran to her while the other charged both attackers in grotesque uneven match and upon his pummeling, her hair detonated into a raving mass of madness. What the hell, she thought, her hair lengthening into sinewy rivulets, extending across the sweet Georgia grass to upsweep the thugs, twist their heads until their eyes jettisoned and impale both to the sharp finials of the wrought iron fence.

The whirling keratin hovered above the corpses and she used the lapse to whip them back in subdued dissension and slinking retreat to cling close to her scalp. Zoyzi could hear the wail of approaching sirens or perhaps the siren was she, an ephemeral vision for the young man cradling the dead girl, her stroke of his boyish hair a soothe to his grief as she ran past and out of the park, soon to be close-cropped and free.

Sheree Shatsky writes short fiction believing much can be conveyed with a few simple words. Her most recent work appeared in Sick Lit Magazine. Read more by Ms. Shatsky at www.shereeshatsky.com