Vol. 4 and Vol. 3 Kindle editions on sale during the 2016 AWP Conference

This volume of The Conium Review features nine new stories from Emily Koon, Tamara K. Walker, Rita Bullwinkel, Marina Petrova, Kayla Pongrac, Ingrid Jendrzejewski, Zach Powers, and Theodora Ziolkowski. The pieces include a mix of flash fiction and short stories, each with a penchant for innovative characterization, bizarre settings, and other weirdness. You’ll discover a dictator in a jar, a modernized fairy tale, a person living as a Tinseltown extra, and more. 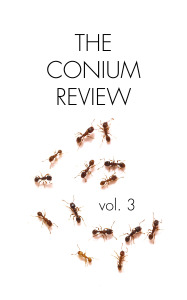 This volume of The Conium Review features eight new stories from Olivia Ciacci, Tom Howard, D. V. Klenak, Jan LaPerle, Zach Powers, Christine Texeira, and Meeah Williams. In these strange and surreal stories, you’ll find a company that sells knight-in-shining-armor-style happy endings, a boy with a second person trapped inside of him, a contemporary fable with a chickadee protagonist, and more. The pieces include flash fiction, short stories, and novella-length fiction.