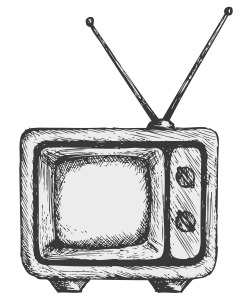 One night watching TV after dinner, Dad grips the arms of his easy chair during a cat food commercial and announces, “I know what you all want. You want me to play a role.” He stands up and pulls off the sweaty head he’s been wearing for the last twelve seasons. “But I’m not interested in playing that role anymore. What’s more, I never was. You’re typecasting me and I won’t stand for it a moment longer. Find some other sucker to play the bad guy in your melodrama. I’m out of here!” He tosses the empty head on the chair. We don’t recognize him anymore. He’s taller, blonder, younger looking; he looks like he belongs in a surfer movie. In fact, he’s wearing a pair of embarrassingly skimpy swimming trunks. He grabs his coat and car keys and leaves the house with a door slam and never comes back. There is no laugh-track, no applause. We sit there numb, staring at one another like faceless mannequins, our heads smooth plaster knobs. Then the test signal indicates the station is having technical difficulties. I’ll say! Please stand by.

Of course it’s a shock and a trauma but we have to go on. I try the head on first; it’s an absolute no-go. My brother gives it a fit—better, but no cigar. What could you expect? My mother grows bitter and disgusted before our eyes. She doesn’t need a fortune teller to read the future. She’ll have to find a real man now but she hasn’t the stomach for it. Instead she sits by the window, gray and blank as a TV screen with the power off, and waits for her Prince Charming, her knight-in-shining-armor to come. She’s too late. That show’s been canceled. The last episode already aired and she missed it. The Knight came and went and took Dad with him.

The wolf lived happily ever after.